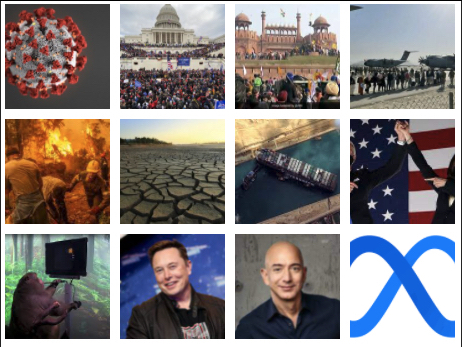 2021 – with fear and sadness, been also the year of hope, memories, strength, and looking ahead!

Let us spend few mins to recap major events of 2021.

Presenting here Top 10 key events of this year for you!

While most of the world for most of the time was pressed by pause button of Covid lockdown and hope of vaccine also proven true at the end of 2020; 2021 was still worse than the previous year! While 1.88 million deaths recorded in 2020, this number reached just in June 2021! While we are nearing to end 2021, total covid cases has risen to 281 million and total deaths have surpassed 5.41 million! After first variant, Covid-19 virus changed its structure in current year to much complex versions through delta and omicron variants first found in India and South Africa respectively. All FDA approved vaccines are much effective against delta. But omicron spreads faster to vaccinated and booster dosed people and can relay faster too. But still vaccines and booster doses remain to be effective against highly severe illness and deaths. While WHO says that 70% – 90% of the population should be vaccinated to achieve heard immunity, around 49% of world’s population is double vaccinated while I’m writing this.

One more example that no one wins war and war is never a solution! President Joe Biden office ordered U.S. troops withdrawal before twentieth anniversary of 9/11 attacks. Spending around $2.3 Trillion ($300 million a day) in two decades, American troops withdrawal ended on August 31st. After this, Taliban again took over Afghanistan just like before. The Taliban seized the capital city Kabul on August 15th and the President Ashram Ghani government got dissolved. After Taliban took control this year, nearly 123,000 people got airlifted out of the country. 50,000 arrived in the United States, stating one of the biggest airlift operations by the US. People also migrated to other countries including Germany, Spain, Kuwait, and Qatar. People had even started migrating in 2020 in countries Pakistan, Iran, Germany, Turkey, Austria, France, Greece, Sweden etc. Around 300,000 Afghans have been airlifted since 2001.

United States Capitol, Washington D.C. is the main location where the American Senate and the House of Representatives meet for presidents’ inauguration, to pass country’s laws and other prime government ceremonies. On January 6th, congress session was scheduled to meet here to formalize current president Joe Biden’s victory over that time’s president Donald Trump. On January 5th and 6th Trump provoked his supporters and called actions by calling the election stolen. During his ‘Save America’ rally on January 6th noon; thousands of supporters walked to the Capitol building and hundreds of violated police rules and entered the building. The building was cleared out by late evening. Trump’s Twitter, Facebook, and YouTube accounts was permanently banned after this incident. A week after the incident Trump was impeached by the house of representatives, the only president to be impeached twice. In February, though the senate votes were in favor of Trump by not gaining two third majority. Over 30 members were charged for allegedly planning these attacks. Attacks caused damage of around $1.5 million. While the event made highlights of all news channels around the world, this was not the first time the capitol was attacked. Read here for past incidents of capitol attacks since 1812.

With all dramas by Trump and his supporters, Joseph Robinette Biden Jr., the member of the Demotic party took auth as 46th American President on January 20th. His inauguration ceremony was majorly a silent event under masks due to Covid-19 thread. While Biden is the oldest president in American history, Kamala Harris became first female vice president and also the first African-American and Asian-American vice president in American history. As published by the White House office, Biden-Harris immediate priorities will be Covid, climate crisis, racial equality, economy, healthcare, immigration and restoring America’s global standing.

Indian farmers did major protests from Aug 9th, 2020, to Dec 11th, 2021, against 3 farm bills passed by the government of India. Farmers were against these bills as they feared that the law will open sales and marketing of agriculture products outside of Agriculture Produce Market Committee (APMC). The future of farmers was predicted by them that gradually the local sabji-mandi system would be ended leaving no control of business on local businessman. This is what they were opposing.  Over 250 million people had participated in this protest, around 700 deaths caused, and was one of the world’s largest protests. A lot of politics played around this protest and as usual normal citizens got brutally panelized! On November 19th, the prime minister of India announced that his government would repeal the laws and was finally formally repealed in parliament winter session on December 1st.  I had mentioned about this protest in my blog of Top 10 events of 2020 but just did not want it to be a mention in this blog of Top 10 events of 2021! Unfortunate for a country whose farmers are respectfully called as fathers!

Demand of microchip (integrated circuits) is increasingly high than the supply and the shortage has badly impacted around 169 big to small industries. Highly impacted industries are automobile, computers and graphic controllers, video game consoles, and all various devices requiring semiconductor chips. Major causes of this worldwide shortage are Covid-19 pandemic, United States – China trade war, winter storm of Texas in February, and fires in key Japanese chips manufacturing companies Renesas Electronics and Asahi Kasai. Talking about auto industry only; 9.4 million less cars production recorded causing the loss of $210 billion.  Predictions say that the crisis will continue to remain in 2022 as well.

One of the largest container ships ever built, got stuck in Suez Canal, Egypt on March 23rd and could release after 6 days. The container ship was heading from China to the Netherlands. The ship stretched 1,300 feet, weighted 220,000-ton, and it blocked more 100 ships around it! While many reasons including heavy winds, failing to provide tugs, canal narrowest patch size vs. container ship size, series of inappropriate commands by Egyptian pilots made it worse etc.; Egypt authorities have announced plans to widen the narrowest canal passage. This jam froze worldwide shipping and encored loss of nearly $10 billion per day!

Nuralink, Elon Musk’s neural interface tech company is working to build a coin size chip  that could be fitted in human’s skull, record brain activities and simulate it for further smart moves.  Last year the company inserted the wired chip into brain of a pig named Gertrude and started recording its actions and predictions. This year, company implanted a wireless chip in a monkey named Pager’s skull and enabled him playing video game ‘pong’ using his mind. As claimed by the company, the chip is designed to control an electronic interface with its mind only and not making it uncomfortable nor looking weird. Next move is to have two monkeys playing the game with each other. Nuralink’s main objective is to build human-computer interface and enrich human brain through artificial intelligence. This invention is worth mentioning because this is leading towards gigantic and strange changes for humans

Few key business or technology updates that took place in this year are worth mentioning:

Avani signing off for this year with the best wishes and prayers of peace, health, unity and happiness for 2022!

Thanks for references to: nytimes, bbc, wikipedia, cnbc