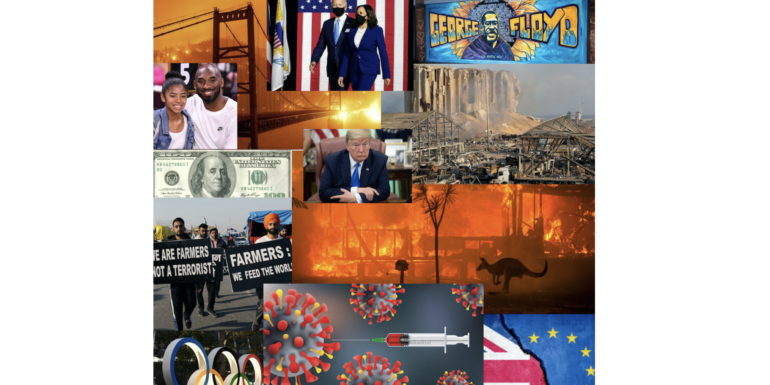 2020 has been the most different and difficult year for most of us. Covid-19 pandemic has shaken the entire world by all the means. Personal, emotional, social, financial, and strategic losses caused in this year are awful.

I’m summarizing the Top 10 events occurred in the year 2020.

The disaster discovered in November 2019 turned to century’s worst pandemic in 2020!  Total count of people infected reached 80.9 million with 1.77 million lost their lives. Though the stock market is pretending encouraging numbers till today, economy around the world has worsened with millions of jobs lost and businesses closed. Hospitality and leisure, retailing, and realter markets are collapsed. Forbes November 2020 report by Moody mentioned that in the US only it could take as long as 4 years to recover 22 million jobs lost during Covid-19. Recession around the world is becoming tougher day by day. More than half of shutdown businesses around the world may never start again. Depression is taking away family harmony and peace from many homes. Impact of these days and stressful online education on kids and Gen Z students will never be compensatory!

Scientists have done tremendous job throughout the year in rolling out Covid vaccine. At the end of 2020, there are 3 approved vaccines for full use, 5 are in early stage for limited use, 19 in phase 3 trials of large-scale effectiveness, 20 in phase 2 safety trials and 44 are undergoing Phase 1 testing. Unlike anti vaccination activists, people are eagerly waiting for it.

Just like Covid, forest wildfires in New South Wales Australia started in November 2019 and got worsened in summer in Australia in Jan-Feb. The black summer bush fires destroyed around 18.6 million hectors forest lands. More than 1 billion reptiles, animals including kangaroos, birds, and mammals’ deaths are estimated. The devastating event killed around 34 people including 3 fire fighters and destroyed 5,900 buildings including more than half of numbers homes. Air pollution increased 23 times the hazardous level at the peaks of fires.

At the other end, more than 100 deadly wildfires in west coasts of the United States in California, Oregon, Washington, and Colorado states burnt more than 8.2 million acres land. At least 46 people killed due to these fires and around 14,000 structures were destroyed. Air quality index reached up to 500 on AQA scale. 1200 to 3000 indirect deaths due to smoke inhalation is also estimated due to west coast 2020 fires.

In the evening of May 25th’ 2020, an African American man named George Fluid died at the hands of Minneapolis police. The incident of police brutality and injustice for people with skin started local protests in Minneapolis and very quickly spread across 2000 cities in the United States. These protests were joined by 15 million to 26 million people in America and is considered as potential largest moment in terms of participation. The protests also received immense support in over 60 other countries worldwide.

On August 4th in an accidental detonation of 2,750 tons of ammonium nitrate, massive explosion took place in Lebanon’s Beirut port area. At least 190 people were killed, 6,500 people were injured, and 300,000 people became homeless. The blasts were so severe that were heard till 150 miles away in Cyprus. The explosion was 10 times bigger than non-conventional weapon and said to be one of the largest non-nuclear blasts in history.

2020 was the year with full of political excitements in US history.

US Elections 2020 was the most dramatic elections ever in American history. Joe Biden won by 306 electoral votes by defeating current President Donald Trump who received 232 electoral votes. Joe Biden, 78 will be the oldest commander in chief in American history. While Kamala Harris, 56 becomes the first women, the first Indian or Asian origin and daughter of immigrants to take oath as America’s Vice President.

Though secretory of states and all authorized agencies have declared 2020 US election as the most secured election, current President has continued to call election 2020 as fraud election and not accepted the defeat. Transition time from Nov to January 20th is very important in American timeline but Joe and Kamala continue to struggle with transition support.

Another remarkable event was the President impeachment. House of representatives in US senate passed vote of impeachment for the President Donald Trump for abuse of power. The impeachment was clear in February with 230 votes in favor and 197 in against. In American history, out of 45 presidents 3 are impeached and none are convicted so far.

Indian government passed an agricultural bill – three farm bill – in September that collectively seeks to provide farmers with multiple marketing channels and provide legal framework. Around 50 farmer unions are protesting since more than 3 months against this. The new laws allow market forces to venture freely into the farm sector in India, which is heavily regulated by the government. The bill is claimed to purposefully miss many important details in writing. And the fear is of misuse of this gap by government and corporates. Farmers claim that through this bill, corporates like Reliance and Adani will be benefited and will demolish farmers up-lifting. The nationwide strike on November 26th received support of more than 250 million people across and outside the country. India Today group has estimated 2,00,000 to 3,00,000 farmers were uniting at various border points on the way to New Delhi. Fatalities claimed so far are of 41 farmers.

In another key change, government of India has approved privatization of 6 airports which will be operated and managed by Adani Enterprise. After partly privatization of PSU banks and IRCTC; airports are government’s key agenda items of disinvestments.

Another highlighting point in Indian politics was Protests of Citizenship amendment act (CAA) passed in December 2019. Protests around the country continued in 2020 and killed at least 53 people by February. The protests were supported across 14 states of the country.

All above mentioned acts remain unheard as of today even after voices of millions of citizens.

As a result of EU or Brexit referendum in 2016, nearly half (49%) polls voted for UK to leave EU. The biggest reason behind this result was to regain control over immigration and its borderers and increase the ability of UK to take its own decisions in its favor. As a result, on January 31, the United Kingdom withdrew from the European Union finalizing Brexit. UK is the first country to leave EU after its 47 years of membership.

American basketball player, 18 time all-star, 5 times NBA champion and one of the best basketball players of his generation Koby Bryant of 41, his daughter Gianna of 13, basketball coach John Altobelli, 5 other passengers and the pilot were killed in tragic helicopter crash in the city of Calabasas, California in late January.

Japanese Prime Minister Shinzo Abe announced on March 24th that in a joint decision taken in a phone call conversation between IOC and Japan, Tokyo Olympics 2020 will be postponed till summer of 2021 due to the pandemic.

This is the first major interruption to the Olympics since World War II where 1994 summer Olympics were cancelled. Coincidently, 1994 Olympics were also hosted by Tokyo.

Even in the days of tension and depression there were and there are heroes who continued to work with the same passion and humanity. Healthcare workers, firefighters, policemen, and other support staffs risked their lives but continued to provide their service to save lives of their fellow citizens.

Finishing my last blog of 2020 with a salute to these heroes and prayers for better tomorrow for mankind.